Why Every Company Will Be Using Blockchain By 2027

Almost a decade ago, Satoshi Nakamoto, the creator of Bitcoin, silently disrupted trust-providing organizations, like banks, with an eight-page long research paper describing how money can be decentralized (through Bitcoin).

At the time, not many people understood the potential that those eight pages concealed within themselves.

No, I am not talking about decentralizing money.

I am referring to the decentralization itself. In those eight pages, Nakamoto didn’t just explain how we can regain control over our money – he offered a new way for strangers to safely collaborate with each other.

You might have come across people who deny the potential of blockchains and tell you not to buy into the hype.

My advice: do not pay too much attention to them.

In this article, we discuss five different ways blockchain will fit into your company in less than ten years from now.

So let’s start with the basics: what is blockchain exactly?

Put simply, a blockchain is a database. It’s an ever-growing database of different kinds of data and it has quite remarkable properties:

To understand how several people are able to keep their copies of the database in sync with everyone else’s, imagine this:

There are ten individuals in a network.

Everyone is sitting with an empty folder and a blank page in front of them. 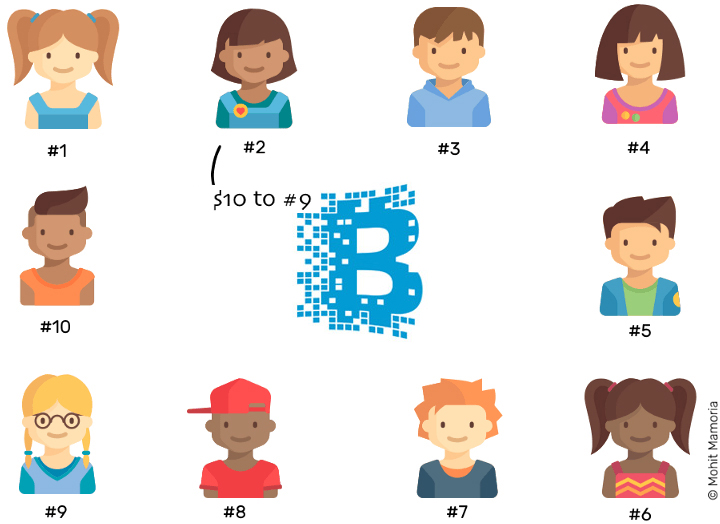 Once the page is sealed, it is added to the folder. A new page is brought out and the process continues forever.

As time passes, these pages (blocks) that contain important records (transactions) are added to the folder (chain), thus forming the database (blockchain).

For the detailed version, here’s the ultimate guide to understanding blockchain.

Because of its unique properties, blockchain technology can be used in many different industries, ranging from banking and accounting to the entertainment industry.

Contracts
“Until the contract is signed, nothing is real.” – Glenn Danzig

What would you call a business that isn’t “doing business?” Blockchain will have a large impact on the way organizations engage with one another. Doing business means transacting with other parties to facilitate something that wouldn’t be possible alone. In such an arrangement, the two organizations need to be sure they can trust each other.

In 2017, this trust is provided by a set of pages, or contract, that lists all the terms and conditions of engagement. When a party doesn’t adhere to the promises mentioned in the contract it can be enforced by law – but this can result in an expensive and timely process. So in many cases, going to court over a breach of contract simply isn’t worth the trouble.

Using blockchain technology, many of these contracts can be converted into Smart Contracts. Unlike conventional contracts, smart contracts consist of software code and are executed by the blockchain network. The beauty of these smart contracts is that they cannot be modified after they are deployed, which ensures neither party in a deal can walk away without doing their part.

Smart contracts, written in code on the blockchain, are contracts that are completely inalterable once they have been triggered.

Imagine you’re in a band and you want to sell your music to someone, meaning you’ll have to transfer an audio file. How can you be sure the buyer will pay for it after receiving it? At the same time, the buyer might be skeptical too, thinking you won’t send the audio file if they make the payment first. A smart contract ensures that once the buyer has transferred the money, the audio file will immediately be sent to the buyer. Once deployed, no one can stop the contract from being executed. So both parties can trust the code.

Payments
“If you think nobody cares about you, try missing a couple of payments.” – Steven Wright

If your business requires payment transactions between countries, blockchains will come in handy as well. One of the biggest promises of blockchain is that it will replace money someday. This, of course, would entail such a radical shift that it would take years, if not decades, to happen. But right now, we can already use blockchains to transfer money across the globe within minutes, instead of days.

One of the benefits of decentralized money is that payments can be transferred directly between peers, without any intermediaries, like banks, slowing down the process. Given this, cross-border remittances will no doubt be another area of your business that will adopt blockchain.

Recruiting
“We’re going to become caretakers for the robots. That’s what the next generation of work is going to be.” – Gray Scott

Experts predict that robots will someday take over our jobs. But until that day arrives, CEO’s everywhere will still need humans running their companies.

Unlike robots, however, people do not come with trademarks or reputation badges. Which is why finding the right employees for your company can be a daunting task.

But what if such information about possible new hires became publicly available? As explored in this article, blockchains can pave the way for faster, cheaper and trustless (where you don’t have to trust another human being for authenticity) reference checks. Each person would have a trail of feedback which would be accumulated over the course of their career by past employers. This would enable new employers to quickly review this trail and decide whether this person would be the right match for the job.

Convenient enough for the new employer, but what happens if this trail contains false information? Suppose your previous boss was a hateful, horrible person – will you then be forever haunted by their negative feedback?

To make sure this doesn’t happen, the reference system should be a two-way street. This way employees can also rate their employers, and if needed, each other. A bad rating from an employer with a bad reputation in the system will have less weight than someone who’s proven trustworthy.

Cloud Storage
“Behind every cloud is another cloud.” – Judy Garland

If you’re running a business, chances are you have company data stored in the cloud. According to a recent report by cloud services provider BCSG, a growing number of small and medium-sized companies are turning to cloud computing. Currently, 64% of small business owners have an average of three cloud solutions in place, which is expected to increase to 72% in the next three years.

Blockchains are playing a huge role in decentralizing cloud storage because they allow strangers to collaborate with each other. Instead of storing files on a single centralized server, you’ll be able to save your files on thousands of devices across the globe.

Here’s how that works: Every file you upload will be divided into several tiny chunks, and each of these chunks will be stored on several devices in the network. Which particular chunk is stored on which particular device is recorded on the blockchain. If you need to retrieve that file, the system will assemble it for you based on this information.

Also, in centralized systems, the strength of the system depends on how secure one company’s servers are. Using decentralized networks, there isn’t just one device that contains the complete file, which makes it practically impossible for hackers to obtain the data.

Less Hierarchy, Better Governance
Companies will thrive in an environment where power is not limited to the hands of a few, yet this is the way organizations are often structured.

These current authority structures are the result of inefficiencies in coordinating a large crowd. Blockchain itself is not a new technology – it is just a combination of technologies that we’ve had for several decades: peer-to-peer networks and cryptography. Similarly, the solutions on top of blockchains are made up of several moving parts that work together beautifully.

Using a combination of smart contracts on top of the blockchain, communities can have a governance without a hierarchy. It’s very likely that your business will soon have next to zero bureaucracy, and all the major decisions that affect the organization as a whole might be taken through a transparent voting process that gets carried out on a blockchain.

Every proposal gets submitted in the form of a Smart Contract on which everyone can vote. If the threshold defined in the company’s constitution is met, the proposal is approved and further steps can be taken.

These are the few areas that your business might adopt blockchains sooner than you expect, but the possibilities are endless. There are several mental models that you can use to think of blockchains.

When it comes to identifying the potential of blockchains in business, I like to think of blockchain as a method to make strangers work together. Be it your employees, or your partners, or the supply chain, or anybody else, blockchains will soon penetrate your organization in more ways than one.

About the Author
Mohit Mamoria is the CEO of Authorito Capital (a crypto fund) and the editor of a weekly newsletter, Unmade, which delivers one startup idea from the future to your inboxes. He writes regularly for world’s largest publications including HackerNoon, TechCrunch, TheNextWeb, CoinTelegraph among others. This story first appeared on TheNextWeb.

ONE Blockchain is a blockchain-enabled solution that brings rich, supply chain orchestration capabilities to the blockchain. It decreases risk, increases efficiency, and greatly simplifies how partners conduct business transactions.

ONE Blockchain overcomes the problems of confidentiality and slow performance that are limiting the adoption of blockchain in full-scale supply chains. 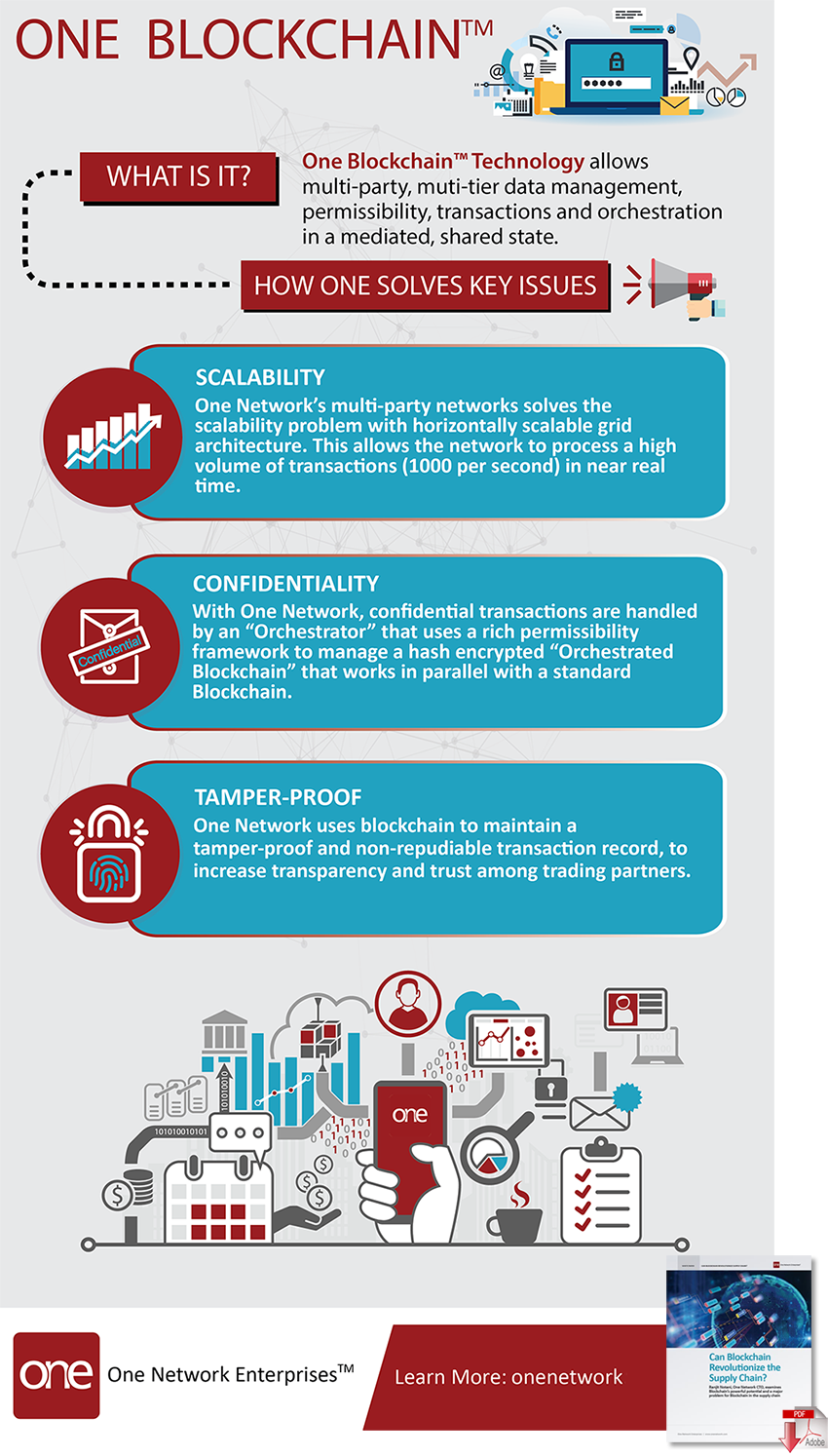 Download the White Paper: Can Blockchain Revolutionize the Supply Chain?

Every Company is an Ecommerce Company