There’s nothing worse than getting halfway into what was once a piping hot cup of coffee or tea, only to have it go cold on you.

But what if you could customize that drink’s temperature as you consumed it, vary the degrees to see how it affects the taste, and enjoy your hot beverage right down to the last drop?

It all started with Alexander’s scrambled eggs, which he, of course, preferred warm versus cold. “I think I can make a heated plate to keep my eggs warm,” the serial entrepreneur said to himself.

If the idea sounds far-fetched, think again. An inventor, Alexander holds over 100 patents worldwide and is the inventor of General Electric’s LED light bulb, the GE Infusion. He started his first company, Radiance Lightworks, in 1999 at the age of 23. Radiance has since become one of the top lighting design agencies in the country with a client list that includes Universal Studios, Mattel and 20th Century Fox.

It didn’t take long for Alexander to solve his cold breakfast problem, but that discovery sparked another question in his mind: What if he could use the same technology – a combination of radio-controlled batteries, heating elements, and sensors – to keep coffee, tea and other drinks hot? Would it be better than those heated, coaster-like mug warmers?

“And with that, Clay set off to invent the world’s first temperature-controlled coffee cup,” says Phil Poel, Ember’s COO.

The company’s first product was a travel mug, which a team of Ember engineers presented to Starbucks – a company that puts great effort into growing, hand-picking, and roasting its coffee beans, only to have the final product poured into a paper cup.

“We put some Starbucks coffee in one of our mugs and asked them to set it at the desired temperature,” says Poel. “They enjoyed their drinks right to the last drop…it went over really well.”

Starbucks put Ember’s travel mug on its shelves for retail sale in 2016. “They sold out in a couple of weeks,” says Poel. “Then they asked for coffee mugs versus travelers. That request transformed our company from ‘startup’ to ‘real company.’” Best Buy jumped onboard not long after, with both partnerships boosting Ember’s sales from $1 million to $14 million “basically overnight,” says Poel.

With the unexpected boost in sales came new manufacturing and distribution challenges, the likes of which the company hadn’t experienced before. “When you have two customers and a few SKUs, the logistics are pretty easy,” says Poel. “The next thing you know, we were making and selling accessories and a variety of different colored mugs.”

When Ember signed Apple as a customer in 2018, the need for a streamlined, reliable logistics and transportation setup became even more important for the innovative manufacturer.

“We knew we needed a great third-party logistics [3PL] partner to handle projects like launching in Apple stores in 26 different countries, and in a single day, opening global e-commerce channels and supplying to TMall China. That in and of itself tells the story of why we needed a reliable logistics partner on our side.”

Up to that point, Zachary Horton, Ember’s shipping and logistics coordinator, says the company was using several different 3PLs to get its products delivered to its large retail customers. “None of the systems were integrated,” he says, “so after exploring our options, we made a conscious decision to make SEKO Logistics our primary 3PL.” 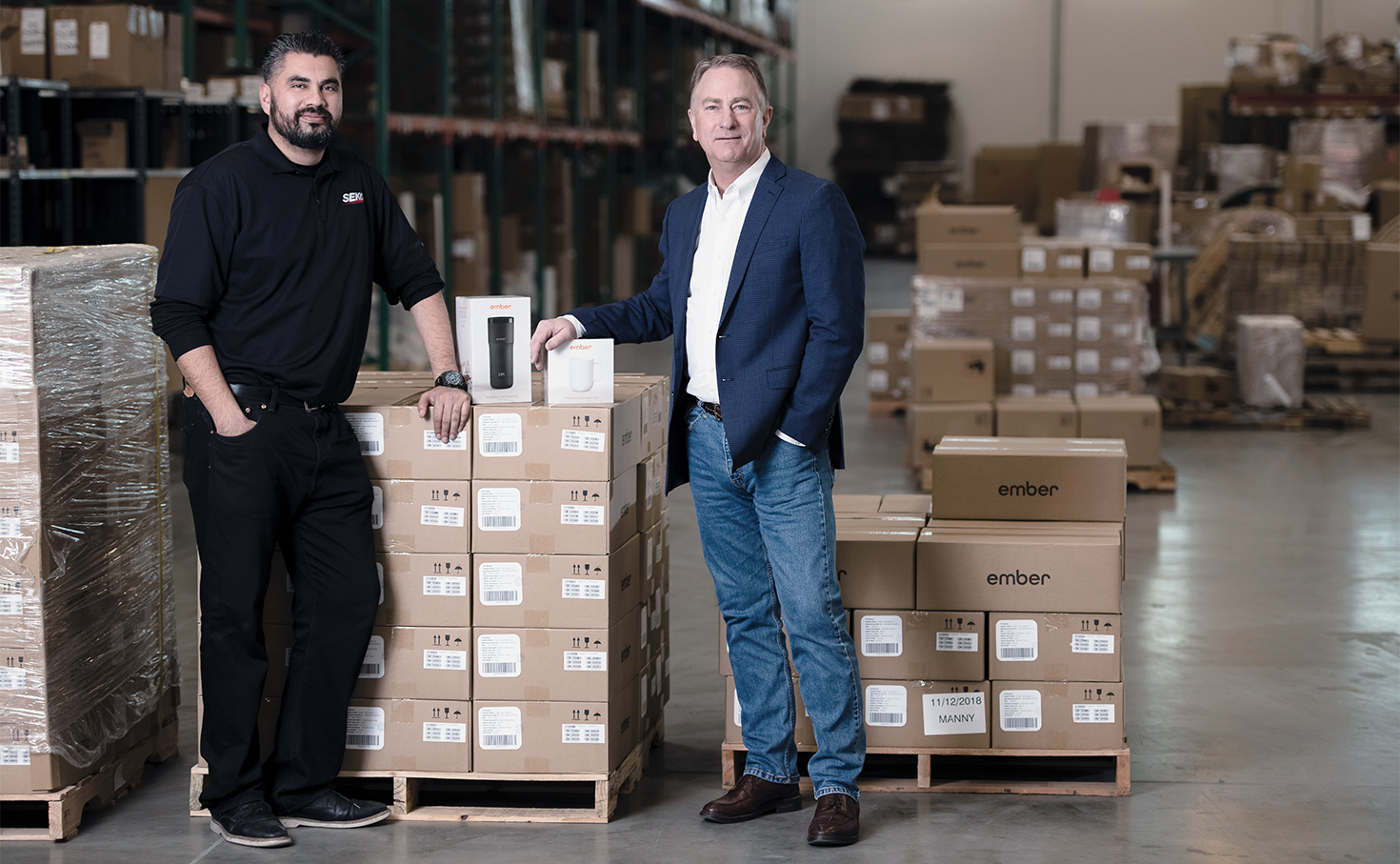 To make that all-important decision, Ember got its finance, operations, logistics and Asia-based procurement team involved in the process. “We got together a good cross-section of departments in order to get a good view of what the 3PL had to offer and how that aligned with our organizational goals,” says Poel.

In 2017, Ember decided to bring its entire distribution chain under a single umbrella. The relationship started with Ember’s connections to SEKO’s Hong Kong team and its primary manufacturing locations in Zhuhai, China, and has since extended across its entire supply chain.

After spending about three months setting up the system, the two companies officially began working together in April of 2018. “We put time into making sure everyone was aligned, teaching SEKO about our brand,” says Horton, “and making sure we all understood our respective roles.”

Poel says that the time that went into the setup process was well spent. “Our 3PL spent a lot of time with us to gain a better understanding of our brand and our goals and didn’t just say: ‘Yes, we can ship your product,’ or ‘send us a box and we’ll ship it,’” Poel explains. “In total, we probably had six different meetings with SEKO – two in Hong Kong and four in the United States – before getting started.”

During those meetings, Poel brought up the “value-justified cost” of working with a single 3PL. In fact, he wrote those three words on a whiteboard to reinforce Ember’s goal of making sure all of its logistics moves are value-justified. “Typically, when you go into these relationships, you wind up negotiating freight rates, weights as well as dollars and cents,” Poel explains. “The process gets pretty convoluted, with companies selecting one provider in order to save two cents here or a penny there.” 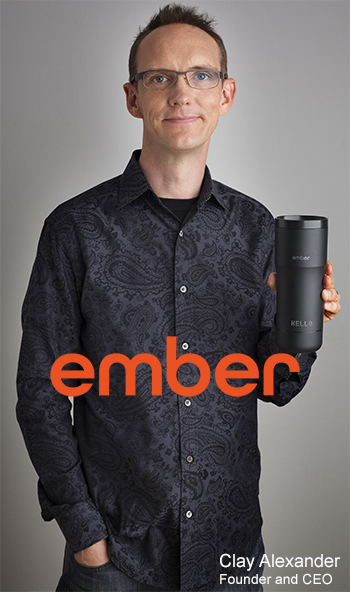 Going against that convention, Ember decided not to discuss price. And while it did crosscheck the 3PL’s weights and costs (and learned that they were indeed competitive), the manufacturer was more interested in the total cost of ownership of the new relationship.

“We told SEKO that we wanted them to bill us based on value-justified cost,” Poel recounts. “At that point, the whole conversation just stopped and SEKO’s commercial officer looked at us and said: ‘That’s the best answer I’ve ever heard.’”

Before moving to a single 3PL, Ember was using one warehouse for e-commerce fulfillment and a separate facility to supply its retail customers. That setup required two completely different sets of inventory, communication modes, and fulfillment approaches.

Today, the manufacturer’s 3PL handles all of its global e-commerce and retail shipments from three locations (U.S., Hong Kong, and the UK) that are all fully integrated.

Having retail and e-commerce distribution under a single system allows Ember to “ebb and flow with demand,” says Horton, “and to ensure that it has all of the necessary pieces in place to deal with sales spikes.” In some cases, those spikes appear at the wee hours of the morning.

Recently, for example, Ember needed to get a shipment from Hong Kong to the United States by 8 a.m. the next morning. “We were on the phone with SEKO at 2 a.m.,” Horton recalls, “and they got our stuff ready to ship and on the plane within six hours and made it happen.”

By using a 3PL that provides this type of over-the-top customer service will be critical for Ember as it continues to grow, both in terms of adding new customers of its own and on the product expansion front. “We’re growing quickly and we need a logistics partner that can go with the flow, so to speak,” says Poel.

“SEKO has been extremely flexible and is always standing by ready to provide new solutions, come up with new approaches, and work with us to solve our logistics issues. That makes them a great partner for us.”

According to Poel, other key benefits include strong global collaboration between Ember and the 3PL’s teams in the United States, Asia, and Europe, and the way in which the logistics provider’s warehouse management system (WMS) seamlessly integrates with the manufacturer’s own systems. “They came in and taught us how to use the WMS,” says Horton. “That was a huge win for us.”

Moving to a single 3PL also helped to streamline outbound shipments and the related communications that, in the past, involved numerous different providers. “Using just one form of communication has been a lot more efficient for us as we’ve grown and expanded,” says Horton, “and without the need for a lot of our own internal systems.”

To shippers that are in expansion mode and looking for a 3PL to help them manage their global supply chains, Poel says that the best approach is to bring all of your issues and lay them out on the table in front of the provider. Then, take the time across several meetings to ensure “crystal clear alignment” between your operations and the provider’s capabilities.

“You want a 3PL that can pick your issues apart and show how it can help you work through them – someone that offers real solutions, not just lip service,” says Poel.

“You’re going to run into multiple 3PLs that say they can do this or that for you when a better approach is to tell them what your challenges are and let them offer solutions. That will save you a lot of time and minimize headaches.” 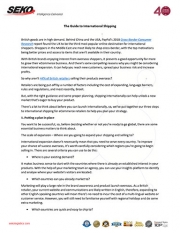 The Guide to International Shipping New!
There’s a lot to think about before you can launch internationally, so, we’ve put together our three steps to international shipping for eCommerce retailers to help you plan your strategy. Download Now! 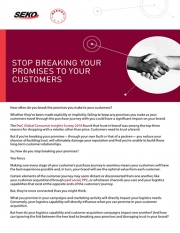 Don’t Damage Your Retail Brand by Breaking Promises with Your Customers
Whether they’ve been made explicitly or implicitly, failing to keep any promises you make as your customers travel through the purchase journey with you could have a significant impact on your brand. Download Now! 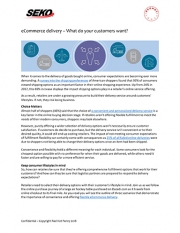 eCommerce Delivery – What do Your Customers Want?
When it comes to the delivery of goods bought online, consumer expectations are becoming ever more demanding. Download Now! 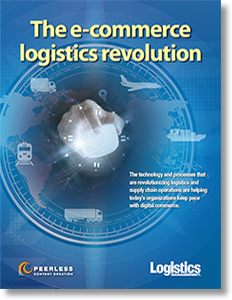 The Ecommerce Logistics Revolution
In this special issue, the editorial staff of Logistics Management has compiled feature stories that encapsulate the software, technology, and processes that are helping today’s retail and manufacturing professionals exceed ever-increasing customer demands – whether in B2B or direct to consumers. Download Now!